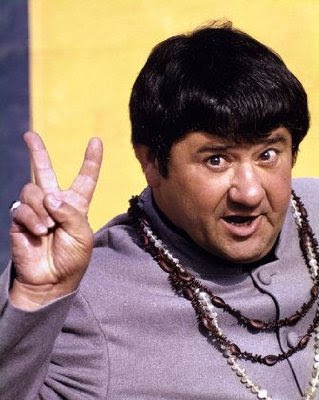 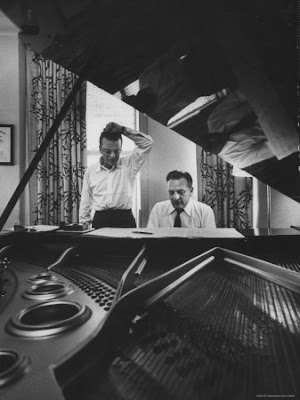 Today, August 31st, Alan Jay Lerner would have turned ninety years old. He died when he was sixty-seven years old. He died absolutely penniless and owed the IRS at the time of his death over one million dollars. The picture at the left is that of dear Mr. Lerner collaborating with his great friend Frederick Lowe. After the sheer stress of "Camelot", Frederick Lowe retired and that was the virtual end of two of the most prolific teams in musical theatre. history. Mr. Lowe absolutely resisted Alan Jay Lerner's desire to direct as well as write. Camelot was a hit nonetheless, with a poignant coda; immediately following the assassination of John F. Kennedy, his widow told Life magazine that JFK's administration reminded her of the "one brief shining moment" of Lerner and Loewe's Camelot. To this day, Camelot is invoked to describe the idealism, romance, and tragedy of the Kennedy years. So with their direction issue not resolved between them Loewe kept his word and retired to Palm Springs, California while Lerner went through a series of unsuccessful musicals with such composers as André Previn (Coco), John Barry (Lolita, My Love), Leonard Bernstein (1600 Pennsylvania Avenue , Burton Lane (Carmelina) and the absolute disaster co-written with dear Charles Strouse called Dance a Little Closer, based on the film, Idiot's Delight, nicknamed "Close A Little Faster" by Broadway wags because it closed on opening night). Most biographers blame Lerner's professional decline on the lack of not only a strong composer but a strong director whom Lerner could collaborate with, as Neil Simon did with Mike Nichols or Stephen Sondheim did with Harold Prince (Moss Hart who had directed My Fair Lady, died shortly after Camelot opened). In 1965 Lerner collaborated again with Burton Lane for a modest success on the musical On a Clear Day You Can See Forever, which was adapted for film in 1970. Lerner was inducted into the Songwriters Hall of Fame in 1971. John Nugent and I called upon the fact of Alan Jay Lerner's eight failed marriages in our own musical "A Little Bit Of Broadway" to base the character of Chester Moore upon. That musical is getting a lot of attention lately and we are gearing up for a big stage production next year in San Gabriel. Our first pro show. It's now completely re-written and other theatres in considering it have called it "compelling" and "memorable". Some theatres are wishing we'd dump the gay element of the show, but that isn't going to happen any time soon. Today would also have been the birthday of dear Buddy Hackett. The picture of him here is from the Walt Disney movie "The Love Bug". I met him once with that film's star Dean Jones selling them both a camera and he was so damn funny and one more thing-- gracious as anyone in show business I have ever met. Did you know that when Curly Howard of the Three Stooges had a stroke, the part of Curly was offered to Buddy and he turned that opportunity down. He also played Lou Costello in an acclaimed television movie called Bud and Lou in which the late Harvey Korman played Bud Abbott. Oh by the way: another story about Alan Jay Lerner: In 1973, he coaxed Fritz Loewe out of retirement to augment the Gigi score for a musical stage adaptation. The following year they collaborated on a musical film version of The Little Prince, based on the classic children's tale by Antoine de Saint-Exupéry. This film was a critical and box office failure, but has gained a modern following. Alan's autobiography The Street Where I Live (written in 1978), was an account of three of his and Loewe's successful collaborations, My Fair Lady, Gigi, and Camelot along with personal information. In the last year of his life he published The Musical Theatre: A Celebration, a well-reviewed history of the theatre replete with personal anecdotes and his trademark wit. Interesting note: At the time of Lerner's death, Alan Jay had just begun to write lyrics for for Lloyd Webber's "The Phantom of the Opera", and was replaced by Charles Hart. Now how interesting might that have made the legendary show. He also had been working with Gerard Kenny in London on a musical version of the classic film My Man Godfrey. Believe it or not Alan Jay had turned down an invitation to write the English-language lyrics for the musical version of Les Misérables. Oh my! The things that we do versus what we turn down in our lives!
Posted by Unknown at 9:48 PM

Sweet blog! I found it while surfing around on Yahoo News.
Do you have any suggestions on how to get listed in Yahoo News?
I've been trying for a while but I never seem to get
there! Cheers

I just could not go away your site prior to suggesting that I
actually loved the standard info a person supply on your guests?

What i do not understood is in truth how you're not really a lot more neatly-preferred than you might be right now.

You're very intelligent. You recognize therefore significantly relating
to this matter, made me in my view believe it from numerous various angles.
Its like women and men aren't interested except it's one thing to accomplish with Lady gaga!
Your own stuffs great. Always deal with it up!